A Humble Mensch With Vanity Plates

Inspired by the SUV’s tags, I sought out the owner, John Mitchell. 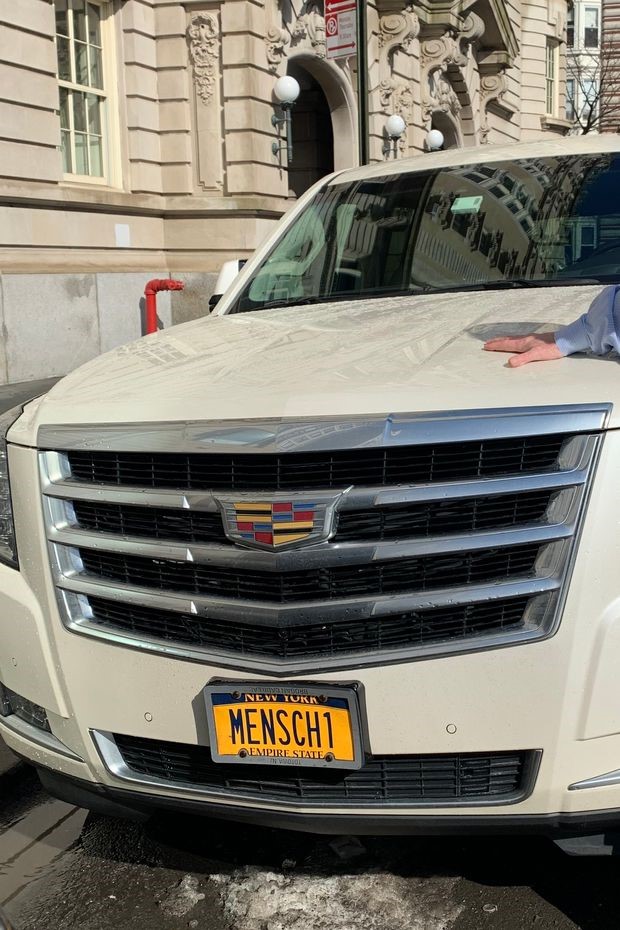 The first time I noticed it, I thought: That’s cute, that’s clever. After encountering it over and over in my Manhattan neighborhood, I began to think of it as a personal call-out for me. Such was my relationship with the license plate “MENSCH1.”

Mensch is a Jewish term of endearment for someone who is kind and considerate, who can be called on for help without expectation of payment in return. It derives from the German word for “person” or “human being,” mensch has come to mean the highest expression of humanity, with honor and integrity thrown in. It’s usually applied to men, but there’s no shortage of women who exhibit menschlichkeit.

A traditional mensch might be too modest to brand himself one, especially affixed to the front and back of a white Cadillac Escalade. Seeing the car daily walking my dog along Central Park West, I imagined the owner as a garment mogul with gold chains or an orthodontist who frequents charity galas.

Although I attend synagogue and hope I have a moral compass, the plate challenged and inspired me as no sermon would. Scrolling my phone or waiting for my schnauzer to finish sniffing a garbage bag, I’d look up and see MENSCH1 beaming at me from the curb. It was a call to action: Will I be a human being today? How can I assist someone other than myself? It worked, even on a small level. Friends began texting me profuse thanks for supportive advice I was dispensing. Several sent bottles of wine. My wife noticed I’d stopped complaining about driving 55 miles to see her parents. Little did anyone know to credit an SUV vanity plate.

Determined to find out who was prompting me to be a better version of myself, I wrote a note with my phone number and set out in search of the Escalade. I left my appeal on the windshield and was surprised to get a response within hours.

“Hi, it’s John Mitchell, your note brought a smile to my face,” he texted and agreed to speak. The John Mitchell I remembered from the Nixon administration wasn’t known as a mensch, but this one was different. Yes, he lives in a stony building—but on the ground floor, as resident manager, overseeing doormen, porters and service staff serving 52 apartments.

“We distribute the mail, collect the garbage, control leaks, and keep it clean,” he said, his voice rich with his old Bronx neighborhood. “I got rid of all the deadbeats.” He used his talent for plumbing, carpentry, plastering and electrical work to offer additional services, and what started as a side hustle became an insured enterprise.

“Now shareholders know they can call any time and me and my guys will do whatever is needed, whenever it’s needed,” he says. “The residents are the ones who suggested I use the name Mensch Reliable Contracting. I told them I’m not Jewish, and they said you don’t have to be Jewish to be a mensch.”

Five years ago he was renewing his car’s tags and applied for MENSCH. “It was taken, but MENSCH1 was available.” When his son Zachary returned from a stint in the Army recently, “I told him, always be a decent guy and do the right thing—be a mensch.”

Have a blessed week!
Pastor Jeff