When I was a young man in the late 1950’s, I would at times go to work with my father. My father was a custodian at the Union Gas Company in Independence, Kansas. My father always started me off with the same job, cleaning the brass cuspidor in the President’s office. It would be considered by many people as a very dirty job, but I took extraordinary pride in cleaning it.

I would take it to the janitorial closet, empty it, and begin the cleaning process. I would polish it until you could see your face in it, then I would proudly return it to the President’s office. Most times I would stare at it as I left the office thinking how beautiful it was. it was. 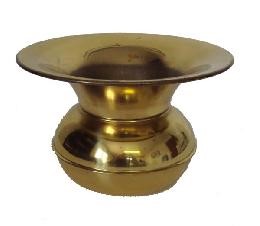 Sometimes I would see the President returning to his office and I knew he would see the beautiful cuspidor I had cleaned. He was a genuinely nice person, wore a large cowboy hat and boots and always seemed tall in stature, he looked to be a giant of a man. He always greeted me kindly and treated my father with respect. His name was Harrison Johnson and I held him in high regard. I do not know why, but it was probably because he treated us with respect. He was a powerful man in the community an owned one of the largest homes in the city.

Some years later after completing my college education and living in Wichita, Kansas, A friend of mine asked me to return to Independence to attend a fund raiser for Senator Bob Dole. I was not particularly interested in the politics of it all, but I had nothing else to do so I told him I would accompany him.

The political rally was held at the Elk’s Club in Independence, a place where African Americans could not enter when I lived there. I often wondered as a young man what people did in that establishment and what it looked like on the inside. I always figured I would never see the inside. I spent most of the afternoon looking around and amusing myself with the fact that I really was in that place.

The place was nice, and I formed no opinion about how I felt about being there. After a few hours of boring political rhetoric, I decided to go to the bar and have a drink. After a brief time, an elderly white gentleman came and sat next to me. We started a conversation about nothing in general and were enjoying each other’s company. He soon turned to me and introduced him self as Harrison Johnson, former President of the Union Gas Company. To say I was shocked would be a gross understatement. Panic, nervousness, fear, and anxiety were more like it. It felt like my blood pressure was rising by the minute.

After having nearly chocked on my drink, I calmed my outward appearance so we could continue our conversation. I told him about my father working for the Union Gas Company, and he replied that he remembered my father and how nice a person he was.

I never told him about the cuspidor. Outwardly I remained calm, but inwardly there was a tumultuous conflict going on in my mind. I was a serious mess. I could not comprehend myself sitting on equal ground with this prominent former President, and at a fund raiser for Senator Bob Dole. I could never in my wildest dreams imagine being in a situation like this sitting next to a man I once considered the most powerful person in our community, whom I would look up to as if he were nine feet tall.

I felt I did not belong, and I wanted to get up and run out of the building. Our conversation ended as cordial as it began, except for my anxiety, all went well. Some might think, wow, you have come full circle, but the anxiety of that acceptance was far from easy.

I did not speak of my anxiety on the way home, in fact, I did not discuss it for years. I would periodically think about that afternoon and the anxiety I felt and wonder why. A few years later I was having lunch with a psychologist friend of mine, and I told him of that experience. His reply was that I was having some cognitive dissonance and not to worry about it.

I was not worried about it, but I was not satisfied with that explanation. So, I decided as many people do, I would self-diagnose. My self-diagnosis took several more years, but I found the answer. God moves us from uncertainty to certainty in our lives. By that I mean God is always trying to free us from situations and things that prevent us from realizing his complete blessings.

I believe that the discord I felt was related to my feelings of inferiority because of my past experiences.

God was trying to move me from being mentally lost in an insane world of bigotry, racism, and injustice, and move me toward a self realization of racial and social equality. I call it the “Unsettling Nature of God’s Blessing.”

God explains, In Romans 12 verse two, when he says, “Don’t copy the behavior and customs of the world, but let God transform you into a new person by changing the way you think”. The scripture Continues, “Then you will know what God wants you to do, and you will know how good and pleasing and perfect his will really is.”

The problem I was having was this “Tug of War” I was having with God. The more he was trying to pull me toward a new realization, the more I was digging myself in. The harder he pulled the more I dug in. To understand this situation, you need to know how comfortable I was in my mindset. It is the same for all of us, we have become conditioned to our situation, whether it is negative or positive and we do not want to change.

That is why becoming a Christian and transforming our lives is often very scary. You must give up and change many things. When I worked for IBM, we used a term called “Homeostasis” our goal was to upset our customer’s homeostasis, in other words, make them feel uncomfortable with their products. The more uncomfortable we could make them feel, the newer products we could introduce and sell to them.

God was trying to upset my homeostasis. He was making me feel uncomfortable with my feelings of inferiority and wanting to introduce me to feelings of equality and high self-esteem. God wants to upset the homeostasis in all our lives. He wants to make us uncomfortable with the lives we are leading. He continues to pull us toward the narrow road of redemption, while we keep digging our heels in to stay on the wide road that leads to nowhere.

The more he pulls, the more we dig in. We exclaim, “Lord” we are comfortable in these Prada and Florsheim shoes and we do not want to change. Our explanation, this road is much too hard to maneuver, too narrow and circuitous. It seems we would rather fight than switch.  We want to be like “Muhammad Ali: “float like a butterfly and sting like a bee” But I can hear God saying, “Listen to me,” I want you to hear what the playwriter said, “Your Arms Are Too Short to Box with God.”

It is difficult for us to let go and recognize that God has a plan for us. The question is, will you be ready when God presents his plan?

In the first chapter of Ephesians verse five, God explains, “His unchanging plan has always been to adopt us into his own family by bringing us to himself through Jesus Christ. Verse nine reveals, “God’s Secret plan has now been revealed to us; it is a plan centered on Christ, designed long ago according to his good pleasure. And this is the plan:  At the right time he will bring everything together under the authority of Christ, —everything in heaven and on earth.

It has taken me a long time to understand the Unsettling Nature of God’s Blessings. I pray daily to end any tug of wars that may exist with God but like with all Christians it is a learning process. Lord help us understand as it is written in Jeremiah 29 v 11. “For I know the plans I have for you,” said the Lord. “They are plans for good and not for disaster, to give you a future and a hope.”

Well, that is my story, and I am sticking to it.

You can now understand why every time I went to work with my father, I always volunteered to polish the brass. Today I own several pairs of cowboy boots and cowboy hats which I wear regularly. I am sure it is because of my experience with Mr. Harrison Johnson.